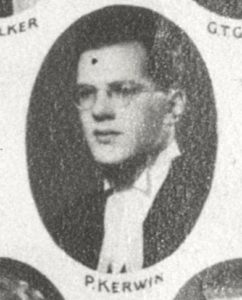 In honour of the 95th anniversary of Daniel & Partners LLP we will be taking a look back at the history of the firm and highlighting some of the interesting and important legal issues that our firm has provided counsel and assistance on over the years.

Today we will be looking at the case of Carrie M. Smallman v. Nellie A. Moore et al, which occurred during Daniel & Partners day’s as “Trapnell, Fleming, and Harris”. The case was argued at the Ontario Court of Appeal by G.T. Walsh, K.C., and H.E. Harris K.C. in November 1946. It was subsequently presented before the Supreme Court of Canada by Harris and P.K. Kerwin, K.C., in December 1947 (judgement delivered in 1948).

Smallman v. Moore was a case concerning breach of contract – specifically, the breach of a promise to marry. Trapnell, Fleming, and Harris acted for the plaintiff, Carrie Smallman, a 46 year old woman who had three children and had been divorced in the 1930’s. Smallman began a relationship with Frank Moore in 1936, and the pair were described by the Court of Appeal as having “kept company” together, and became engaged sometime between January 12, 1945 and February 18th 1945, with a wedding date set for February 24th, 1945. Evidence presented at trial indicated that the date set for marriage was postponed as a result of the death of one of Frank Moore’s sisters. Frank Moore died on April 17th, 1945, as a result of recently discovered heart disease (which was disclosed to Smallman around the time of the postponement).

Smallman brought a claim against Moore’s estate, alleging that prior to his death his actions in postponing the marriage amounted to a breach of the promise to marry. She also claimed at trial that the deceased had promised her that she would be well taken care of, no matter what happened. Smallman claimed both for general damages, and specific damages in relation to clothing she purchased ahead of the marriage. The St. Catharines court ruled in her favour, awarding Smallman $25,000.00 in general damages and $100.00 for specific damages.

The Ontario Court of Appeal reversed this decision. They found that there was no evidence of breach, and also ruled that the jury had used the wrong principles to assess damages, basing their decision on the plaintiff’s loss of ‘position’ and the fact that she would now have to continue working to support herself (as she had done in the past) rather than be supported by a husband who is described within the judgment as being “’fabulously’ wealthy”. Furthermore, the Court of Appeal determined that owing to the fact that knowledge of the engagement was not at the time well known, there would have been no corresponding loss of position suffered by the plaintiff.

In 1948, the Supreme Court of Canada reversed the Court of Appeal decision, finding that there was sufficient evidence that the deceased had breached the promise to marry. However, it did not completely restore the award of the lower court. The SCC found that while general damages initially assessed were very large, the circumstances of the case were such that the award was “not so excessive that no twelve men could reasonably have awarded the amount,” therefore the award should stand. The SCC did maintain the Court of Appeal’s ruling on the matter of special damages, finding insufficient evidence to support either the suggestion that special damages could be awarded in a case like this at all or, at any rate, that Smallman had demonstrated that acts amounting to special damages had occurred. Smallman was ultimately awarded $25,000.00 plus costs incurred for both the appeals to the Ontario Court of Appeal and the Supreme Court of Canada. According the Bank of Canada Inflation Calculator, that would be the equivalent to approximately $283,478.26 in 2017.

There were a number of interesting legal questions/principles considered in this case, particularly on appeal, including:

This case also demonstrates some cultural and societal norms relating to marriage in the 1940’s that are no longer common today. Despite these changes in both those cultural norms and the application of the law, one thing that has remained consistent over the years is the dedication that Daniel & Partners LLP applies to achieving positive results for every client.

We will continue to dive into the history of Daniel & Partners LLP throughout this landmark anniversary year.

Above we have included a picture of the P.K. Kerwin, taken from the composite of the graduating class of Osgoode Hall Law School in 1941. This image was accessed from the Osgoode Digital Commons and is licensed under a Creative Commons Attribution-Noncommercial-No Derivative Works 4.0 License.