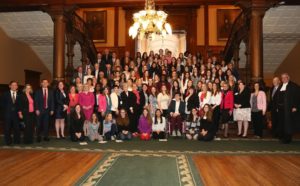 This year marks the 150th anniversary of confederation in Canada. The sesquicentennial presents an opportunity to celebrate our nation. It also gives us an opportunity to recognize the challenges our country has faced, and acknowledging significant issues (both past and present) and work towards resolving them.

It was in this spirit of nuanced celebration that I was pleased to participate in an event called “A Remarkable Assembly.” Held at Queen’s Park in Toronto, ‘A Remarkable Assembly’ was put on by the Ontario government to mark the 100th anniversary of when women were first given the right to vote in the province of Ontario.

Young women from every electoral district in the province were invited to Queen’s Park for a day of meetings, talks, and presentations on both the history and the current state of female participation in government and politics. It was a wonderful experience to be surrounded by so many young women who are keenly aware of and engaged in politics and government at the local level and beyond.

A highlight of the day for me was when the delegates had the opportunity to meet female MPPs and discuss with them their careers, experiences getting into government, and the unique challenges faced by women entering politics.

In particular, I was grateful to have the opportunity to discuss Rowan’s Law with Lisa MacLeod, MPP for Nepean-Carleton. MacLeod was a driving force behind the legislation, which will put into effect recommendations made during a coroner’s inquest following the death Rowan Stringer, and it will create province-wide youth concussion protocols for sport.

Although we were there to celebrate the anniversary of women’s enfranchisement, we were also reminded of the challenges and barriers that women have faced and continue to face when participating in politics or government and accessing government services.

The Honourable Dave Levac, Speaker of the House, reminded the delegates that not all female Ontarians gained the right to vote in 1917. Only those who were 21 or older, born or naturalized British subjects, and who had lived in the country for 12 months could vote. Indigenous women did not gain the right to vote in provincial elections until 1954. Levac, along with other officials who made presentations that day, encouraged the delegates to continue to stay involved in government. We were also reminded that it is our responsibility to build on the work of the female pioneers that came before us and ensure a brighter future.

Thank you to the office of Parliamentary Protocol and Public Relations at the Legislative Assembly of Ontario for organizing the ‘A Remarkable Assembly’ event.